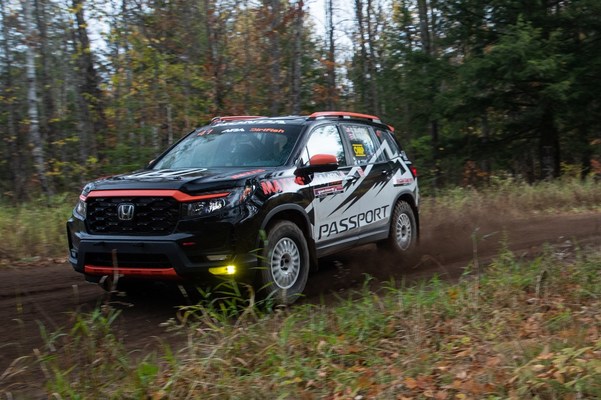 Showcasing the 2022 Passport’s rugged new design, the rally truck made its racing debut at the Lake Superior Performance Rally (LSPR) in Michigan on Oct. 15 and 16. It will compete in the American Rally Association (ARA) series of closed-course rally events through the 2022 season in the Limited 4WD class.

A key example of the Honda «Racing Spirit,» the HPD Maxxis Rally racing team is made up of Honda associates based at the company’s Ohio-based Auto Development Center. The team is a subsidiary of the larger Honda of America Racing Team (HART), which consists of associates from development and manufacturing facilities across North America.

With modified street vehicles reaching speeds of well over 100 mph on natural-terrain closed courses that include gravel, dirt, mud and snow over routes covering hundreds of miles, the ARA National and Regional Championship series are intensely competitive. At the LSPR race, the Honda Passport rally truck was driven by Honda engineer Chris Sladek, a suspension test engineer based at the company’s Ohio-based North American Auto Development Center, and co-driven by Gabriel Nieves, a chassis design engineer based at the same facility.

«The fact that we didn’t have to make any modifications to the 2022 Honda Passport’s drivetrain or suspension for such punishing terrain and competition speaks volumes to the capability and performance that comes standard in the Passport,» said Honda engineer and rally racer Chris Sladek.

At the 2021 Lake Superior Performance Rally on Oct. 15 and 16, the team competed in the ARA East Regional series. The first day of the competition consisted of fast stages with flowing curves and ran late into the night, where the Passport’s auxiliary light bar was crucial in maintaining competitive speeds through the forest. The team consistently ran times among the top 10 out of 42 regional competitors, but a tire de-bead on stage 3 held the team back, causing them to finish more than 9 minutes later than expected for the stage.

More technical, rough, and wet stages were in store for the second day, with the Passport performing well on its Maxxis RAZR M/T tires. The team consistently posted times among the top 15 regional competitors.

The team finished 22nd out of 42 regional competitors, placing 4th out of 6 competitors in the Limited 4WD class.

2021 LSPR is the third stage rally event in which the team has competed in a Honda Passport. During its first event—the 2019 Southern Ohio Forest Rally (SOFR), as part of the ARA East Regional series—the team placed 2nd in the Limited 4WD class and 12th overall out of 75 competitors.

Honda Performance Development, Inc. (HPD), has a rich heritage creating, manufacturing, and supporting Honda Racing and Acura Motorsports customers since 1993. From pinnacle racing in INDYCAR and IMSA Sports Cars to commercial racing programs, HPD powers the dreams of professional and amateur racers from age 4 to 40+. HPD is a wholly owned subsidiary of American Honda Motor Co., Inc. and leads all of Honda and Acura’s high-performance racing programs in North America. HPD specializes in the design and development of powertrain, chassis, electronics, and performance parts, as well as technical and race support. HPD offers parts and race support to Honda and Acura amateur and professional motorsports racers and is continually expanding its palette of racing programs that make Honda racing products available to all racing styles, from karting and Quarter Midgets to the highest levels of pro racing.