NASHVILLE, Tenn., Nov. 1, 2021 /PRNewswire/ — In 1957, a nineteen-year-old college student, Bill Anderson, sat atop a three-story hotel overlooking a few stoplights in the small town of Commerce, Georgia, and wrote «City Lights» on his guitar — singing to the starry night and envisioning a bustling metropolis: 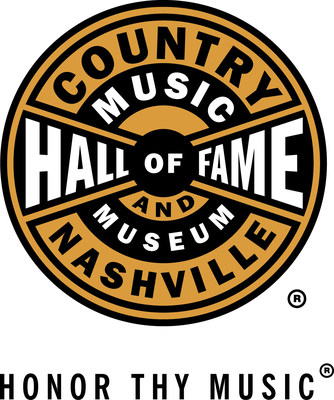 The song, which soared to the top of the country charts for singer Ray Price a year later, kicked off Anderson’s unprecedented career in country music spanning more than six decades, and it defined the depth and imagination of his songwriting that still resonates with audiences and artists today.

The Country Music Hall of Fame and Museum will explore Anderson’s life and musical legacy in the exhibition Bill Anderson: As Far as I Can See, which opens Friday, Dec. 3, and runs through March 19, 2023. The exhibit will trace the Country Music Hall of Fame member’s story from childhood to his days in Georgia, where he excelled as a baseball pitcher and sportswriter while in high school and a disc jockey in college, through his contributions as one of the most decorated recording artists, songwriters and entertainers in history.

Known as «Whisperin’ Bill» for his soft-spoken and conversational singing style, Anderson has placed 80 records on the Billboard charts as a recording artist, with his singles reaching country’s Top Twenty more than 40 times. His original songs have been recorded by a wide array of artists, including James Brown, Elvis Costello, Aretha Franklin, Jerry Lee Lewis, the Louvin Brothers, Dean Martin, Willie Nelson, Charley Pride, Connie Smith, George Strait and many more. As a songwriter, he’s placed songs on the country charts in seven consecutive decades.

Anderson, who also achieved popularity as an actor and game show host, remains a mainstay performer on the Grand Ole Opry today, recently celebrating his 60th anniversary as a member on the historic radio show. More than 60 years after composing «City Lights» on that starry night in Georgia, Anderson is still flourishing as a contemporary songwriter in Nashville, collaborating in recent years with artists Kenny Chesney, Jamey Johnson, Brad Paisley and many others.

«Bill Anderson not only fortified and evolved country music, but his remarkable body of work establishes him as one of the most prolific and preeminent American artists and songsmiths across all genres,» said Kyle Young, CEO of the Country Music Hall of Fame and Museum. «But it’s his natural curiosity, humanity and ability to forge true, emotional connections with audiences – both as a performer and songwriter – that constantly replenishes his relevance and endears him to so many today.»

Items featured in Bill Anderson: As Far as I Can See include historic photographs, treasured keepsakes, instruments, manuscripts and more. Touchscreen interactives will also give visitors the opportunity to delve into Anderson’s songs and songwriting process through archival materials, performance clips and exclusive interview footage in which Anderson reveals the stories behind his songs.

«I grew up dreaming of the day they’d put my ball glove into the Baseball Hall of Fame in Cooperstown, never dreaming that one day it would end up in the Country Music Hall of Fame and Museum in Nashville,» said Bill Anderson. «But now that old glove, along with some guitars, a few rhinestone suits and some scribbled song lyrics are on display in the Bill Anderson: As Far as I Can See exhibit in Music City. When the museum does an exhibit, they really do it up right, and I’m honored to know that I am now a small part of their incredible legacy. I’m not sure I could have ever seen this far.»

Artifact highlights in the exhibit include:

In support of the exhibition’s opening, the museum will host an interview and performance with Anderson, as well as a Songwriter Session with his collaborators, on Saturday, Dec. 4, in the museum’s Ford Theater:

Tickets for both programs will be available on the museum’s website on Friday, Nov. 5, beginning at noon Central.

Musical beginnings
James William Anderson III was born on November 1, 1937, in Columbia, South Carolina. He was fascinated by music from the age of three and as a youngster spent hours listening to country music on the radio. In late 1945, when Anderson was eight, the family moved to Georgia, settling near Atlanta, in Decatur. He learned the guitar and wrote his first song by age 11.

In high school, he formed a band and the group took first place in his school’s talent show on the strength of one of his self-penned songs. But at the time, Anderson was as interested in writing and sports as he was in music. He was a baseball pitcher at Avondale High, while also writing stories about sports for Decatur’s DeKalb New Era newspaper. Anderson entered the University of Georgia in 1955, where he studied journalism and began working as a disc jockey at local radio stations.

After recording his own composition, «City Lights,» in 1957 for Texas-based TNT Records, the song eventually made its way to Country Music Hall of Fame member Ray Price, who took his own version to the top of Billboard‘s country charts in 1958. Anderson soon graduated college, signed to Decca Records, and began his long string of hit recordings with famed record producer and Country Music Hall of Fame member Owen Bradley in Nashville, Tennessee. Anderson wrote many of his hits himself – «The Tip of My Fingers,» «Walk Out Backwards,» «Po’ Folks,» «Mama Sang a Song,» «Still» and «Bright Lights and Country Music,» among many others.

Television and duets
At the beginning of 1965, Anderson began hosting the syndicated TV program The Bill Anderson Show, a widely aired country music showcase. When popular singer Jan Howard joined The Bill Anderson Show in 1966, she and Anderson began recording successful duets together, including four Top Five country hits and four Decca albums between 1968 and 1972. Meanwhile, Anderson’s ease and ready wit on camera led to more television opportunities. He began appearing on Match Game, Tattletales, Password, Hollywood Squares, and other daytime game shows, and even hosted The Better Sex game show on ABC. He also acted in soap operas, including ABC’s One Life to Live.

A second career
After spending years in the limelight as a recording artist and entertainer, Anderson struggled with bouts of writer’s block and feelings of inadequacy in the 1980s. In the 1990s, however, he began co-writing with artists and songwriters, including Country Music Hall of Fame member Vince Gill and Steve Wariner. His name turned up again on the country charts in 1995 with «Which Bridge to Cross (Which Bridge to Burn),» which was co-written with and recorded by Gill. A songwriting renaissance followed. Anderson rounded out the century with two more hits, «Wish You Were Here» by Mark Wills and the Grammy-nominated «Two Teardrops» by Wariner.

A slew of hits continued into the 2000s, including «Whiskey Lullaby,» a ballad Anderson co-wrote with singer-songwriter Jon Randall Stewart about alcoholism and suicide recorded by Brad Paisley and Alison Krauss. In 2002, Anderson was also honored with Broadcast Music Inc.’s inaugural BMI Icon Award for the genre of country music. «Whiskey Lullaby» went on to sell two million copies and won the 2005 Country Music Association Song of the Year award. Its success was followed by 2006’s «Give It Away,» a #1 hit for George Strait that Anderson wrote with Jamey Johnson and Buddy Cannon. It won Song of the Year designations from both the CMA and the Academy of Country Music.

Still going strong
Today, Anderson remains an active force on Nashville’s Music Row. Of late, he has completed several solo albums, collaborated with Country Music Hall of Fame members Bobby Bare and Dolly Parton on new album tracks, and has even written songs via Zoom with Brad Paisley during the pandemic. He continues to serve as a performer and beloved ambassador for the Grand Ole Opry.

In addition to his induction into the Country Music Hall of Fame in 2001, he’s been inducted into the National Songwriters Hall of Fame (2018) and several other halls of fame. In 2021, Connie Smith’s 1964 recording of his song «Once a Day,» was added to the Library of Congress’s National Recording Registry, alongside works by Hank Williams, Bob Dylan, Irving Berlin and other songwriting greats.

More information about this exhibit can be found at www.CountryMusicHallofFame.org.

Suggested Tweet: .@CountryMusicHOF announces details of Bill Anderson: As Far as I Can See. The exhibit will run from Dec. 3, 2021, through March 19, 2023.

About the Country Music Hall of Fame and Museum:
The Country Music Hall of Fame® and Museum collects, preserves and interprets country music and its history for the education and entertainment of diverse audiences. In exhibits, publications and educational programs, the museum explores the cultural importance and enduring beauty of the art form. The museum is operated by the Country Music Foundation, a not-for-profit 501(c)(3) educational organization chartered by the state of Tennessee in 1964. The museum is accredited by the American Alliance of Museums, and is among the 10 most-visited history museums in the U.S. The Country Music Foundation operates Historic RCA Studio B®, Hatch Show Print® poster shop, CMF Records, the Frist Library and Archive and CMF Press. Museum programs are supported in part by Metropolitan Nashville Arts Commission and Tennessee Arts Commission.

More information about the Country Music Hall of Fame® and Museum is available at www.countrymusichalloffame.org or by calling (615) 416-2001.