ROCK ISLAND, Ill., Sept. 30, 2021 /PRNewswire/ — One of the John Wayne’s on-screen Colt revolvers will be offered by Rock Island Auction Company as part of their October 6-8 Sporting & Collector Firearms Auction. «The Duke» was one of the Hollywood’s biggest stars of the 20th century, and mementos of the Western actor are highly sought collectibles. The Colt Single Action Army revolver can be seen used by Wayne in such films as True Grit, Rooster Cogburn, and The Cowboys, among others. Included with the revolver is Wayne’s holster rig and numerous authenticating documents, including a 1972 copy of Life Magazine depicting Wayne on the cover wearing the rig and six-gun. 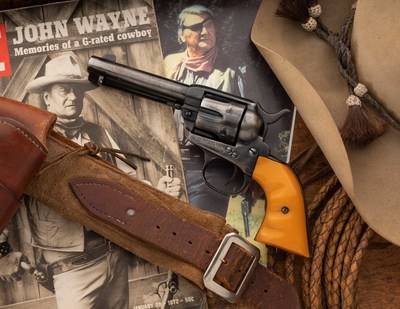 «John Wayne isn’t just a movie star. He’s a persona, a presence,» says RIAC President Kevin Hogan. «To so many, even today, he represents this image of America and masculinity. To have a revolver his iconic characters wielded on-screen, including during his Academy Award-winning performance in True Grit, is going to appeal to several genres of collectors as well as his fans.»

READ MORE ABOUT THIS COLLECTIBLE

While many of Wayne’s films may not be known to younger generations, True Grit has experienced a revival thanks to the 2010 adaptation by the Coen brothers starring Jeff Bridges in the titular role, as well as Hailee Steinfeld, Matt Damon, Barry Pepper, and Josh Brolin.

John Wayne’s Colt revolver is part of a 3-day auction housing more than 7,000 collectible arms, as well as military artifacts and antiques. Those wishing to see or inspect the gun firsthand may do so by appointment or during the auction’s full day preview on October 5. Bids may be placed by calling Rock Island Auction at 1-800-238-8022 or via their website.

Rock Island Auction Company is the world’s #1 auction company for firearms, bladed weapons and militaria. Founded in 1993 by its current CEO Patrick Hogan, RIAC continues to lead the industry with record sales numbers and their extensive and beautiful marketing efforts. Their 150,000 square foot campus consisting of two buildings, hosts around 18 auctions each year. They actively seek consignments, be it a single weapon or a collection of hundreds, a thousand dollar item or one million. For more information, please visit www.rockislandauction.com or call 1-800-238-8022. 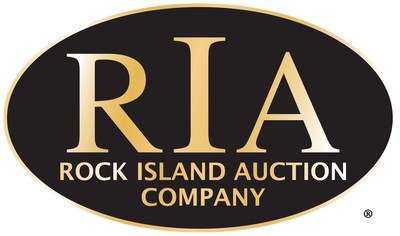