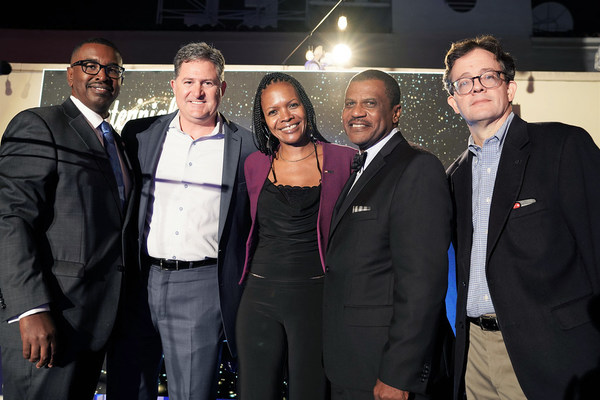 Co-Chairs of the LAUL Centennial Campaign are former NBA player and businessman Baron Davis and real estate businesswoman Dina Leeds. Both are pillars in the community and their respective industries and are playing an active role in LAUL’s centennial campaign and celebration.

«We express our utmost gratitude to all Centennial partners including Wells Fargo, CIT, U.S. Bank, Union Bank, LISC Los Angeles, Bank of America, California Endowment, Banc of California, AIDS Healthcare Foundation, UPS, AT&T, LAWA, DWP, Boeing, and HealthNet who have invested in us over the years and have pledged to invest in us into the future as well.  We thank you for investing in us,» said Michael Lawson, President and CEO of the Los Angeles Urban League. We cannot forget the foundations, businesses and individuals who have supported us through good times as well as the hard times. Foundation partners such as the Weingart Foundation, the Conrad N. Hilton Foundation, The Grow @ Annenberg Foundation, the Smidt Foundation and many others have played a significant role in our growth and sustainability.»

The Los Angeles Urban League continues to maintain a key role as one of the Los Angeles region’s most effective community institutions that achieves significant results in addressing urgent priorities and human needs confronting underserved communities. In 2021, thanks to LAUL’s many partners, the organization’s strength has surged. LAUL is excited about primary programs such as the Entrepreneurship Center, Biz Camp for youth, Backstage Careers, Project Ready, a free college and career training program for 13 – 18 years old students who earn money while receiving valuable skills and learning, Construction Career Academy and other programs and initiatives that will be the beneficiaries of the success of its Centennial Campaign and Fundraising efforts.

As a part of LAUL’s commitment to elevating Black entrepreneurship programmatically and in its business practice, LAUL is intentional about hiring Black vendors to execute all Centennial events. At Centennial Nights, the following Black companies were contracted to execute the event, including Kelly Redmond of Impact Enterprises Global, Inc. as lead Centennial consultant and strategist. Ron Carter of The Carter Agency is public relations and media counsel for LAUL. Jeanine Taylor and Monique Smith of JCEC were the event producers for Centennial Nights. Debra Simmons of Diamond Dust Photography served as the lead photographer, and Jerome Harris of We Are Vision provided videography services for the evening. Linda Stewart of The T-Shirt Spot made the Centennial masks that each guest received in their swag bag. Ms. Stewart is also in the Entrepreneurship program at LAUL. DJ DeVoux Grant was hired for Centennial Nights and the Centennial Community Birthday Celebration.

The evening’s entertainment could not have been better with Terron Brooks, star of the Emmy Award Winning Mini-Series, «The Temptation,» and two-time NAACP Award nominee and Dr. LaMarcus Miller, whose opera credits include singing at prestigious American venues such as Carnegie Hall, New York City Opera, The Kennedy Center, and Jazz at Lincoln Center. Both Mr. Brooks and Dr. Miller received thunderous applauses and standing ovations. DJ DeVoux’s mixing of classics through the generations kept the attendees entertained and many were dancing on the rooftop’s hardwood floor. Centennial Nights guests also received Centennial swag bags including Centennial branded lapel pins, masks, writing pens, mouse pads, and hand sanitizers when they exited the event.

As the evening concluded, Candace Rohr, Centennial Committee Chair of the Los Angeles Urban League, remarked «I’m excited to announce our upcoming fundraising events for the remainder of the season including our golf tournament on November 11, 2021, and the Centennial Gala on April 7, 2022 at the Beverly Hilton. We appreciate your continued support. Stay abreast of all upcoming Centennial events at laul.org/Centennial. Please don’t forget to TEXT «LAUL 100» to «44-321» to GIVE to the Urban League Centennial campaign and please share on your social media.»