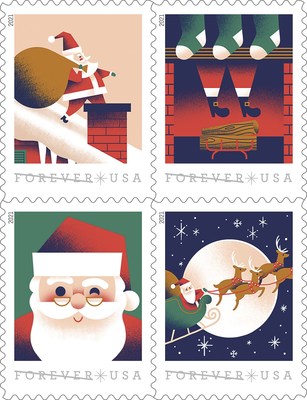 «The A Visit From St. Nick stamps bring joy to the kid in all of us,» said Scott Bombaugh, the Postal Service’s vice president, chief technology officer, who served as dedicating official. «Holiday cards and letters mailed with these stamps will delight people of all ages. They are good to give as gifts or stocking stuffers, too.»

St. Nick — Santa Claus — is one of our most recognized and beloved cultural icons. His jolly laugh and smiling eyes are a happy reminder that Christmas is near.

European immigrants brought to their new country folk characters that over the years became our present-day Santa Claus. One of those characters was Sinterklaas, a folk version of the real-life St. Nicholas of Myra, a third-century bishop, whose feast day became associated with stories of his generosity. Sinterklaas delivered presents on Dec. 5, the eve of the saint’s feast day. In an 1809 satire, American author Washington Irving described a St. Nick who appeared in a dream, portraying him traveling in a flying wagon. A few years later, in 1821, the illustrations accompanying the poem «The Children’s Friend» further embellished the legend with «Santeclaus» arriving in a sleigh drawn by a reindeer.

In 1823, the anonymous publication of the poem «A Visit from St. Nicholas,» perhaps better known as «The Night Before Christmas,» helped to shape much of our modern mythology of the holiday. The poem has St. Nicholas making his journey in a sleigh pulled by eight flying reindeer, each of them carefully called by name. Dressed in fur — with twinkling eyes, rosy cheeks and dimples — St. Nick visits each home to fill children’s stockings with presents. He is described as a merry, plump elf — very different from the original rather somber bishop.

Santa was portrayed in all manner of guises during the 19th century: thin, fat, old or young; an elf or a human; and clothed in anything from long robes to a one-piece undergarment called a union suit, in colors of blue, red, green or purple. Even as illustrators popularized visual images of Santa, they were rarely consistent. However, cartoonist Thomas Nast’s portrait of the white-bearded Santa in his red suit would emerge as the version we are most familiar with today.

Artists in the 20th century based their illustrations of Santa Claus on some of Nast’s images, as well as on the description in «The Night Before Christmas.» Their portrayals of a rosy-cheeked, smiling, grandfatherly man in his red, fur-trimmed suit seemed to embody the very essence of «Santa.»

The A Visit from St. Nick stamps feature four jovial designs. Illustrator Brad Woodard created his images by first sketching then digitizing them. He worked in a palette of original colors of dark blue, red, green, pink and gold/brown.

In the first stamp, Santa stands on a snowy rooftop against a star-filled, pink-hued sky, his sack slung across his back and one leg inside the red-brick chimney.

The next stamp shows Santa as he descends the chimney, his legs dangling over the hearth, clad in black boots and his trademark fur-trimmed suit. A log sits in the grate of the red-brick fireplace, while three green stockings, with white toes and heels, hang on the mantel.

The third stamp is a close-up of a winking Santa set against a green background.

The fourth shows Santa in his sleigh, with four reindeer visible, as they fly across the face of the full moon in a dark, starlit sky.

These stamps are sold in booklets of 20, available now at Post Office locations nationwide and online at usps.com/visitfromstnick. News of the stamps are being shared with the hashtag #VisitfromStNickStamps and #HolidayStamps.

Customers may purchase stamps and other philatelic products through the Postal Store at usps.com/shopstamps, by calling 844-737-7826, by mail through USA Philatelic, or at Post Office locations nationwide.

A video of the ceremony will be available on facebook.com/usps. Information for ordering first-day-of-issue postmarks and covers is at usps.com/shop.

The Postal Service generally receives no tax dollars for operating expenses and relies on the sale of postage, products and services to fund its operations.

The Webb Schools to Receive $100 Million