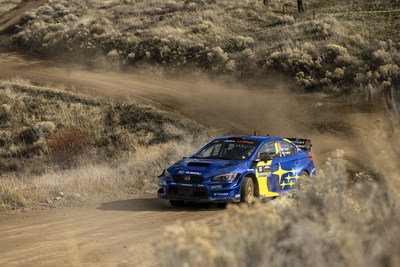 «Great rally, great season!» said Pastrana after the event. «This was such a blast to come out here and be able to race flat out knowing we had done what we needed to win the title. Rhianon did a great job all year and we worked hard to elevate our game after we missed out on the championship in 2020, so it’s an incredible feeling to have that payoff.»

«It’s such a good feeling to be top of the podium in the overall championship!» said Gelsomino. «I’ve been able to win titles in two-wheel drive before but this is my first top class championship here in America–and it was definitely extra fun to beat my husband in the process.»

Pastrana and Gelsomino took charge of the 2021 title race from the outset, storming out of the gate with consecutive wins at Sno*Drift Rally, 100 Acre Wood Rally and Olympus Rally to build a commanding championship lead early in the year. After a second-place finish at Southern Ohio Forest Rally in June and a roll at New England Forest Rally in July, Pastrana and Gelsomino returned to winning form with a fourth victory at August’s Ojibwe Forests Rally to put the title virtually out of reach of their competitors. A runner-up finish at Oregon Trail made it four wins and two second-place finishes for a final tally of 122 championship points out of a possible 132.

Semenuk and Hall, competing in their first full season with Subaru Motorsports USA after a pandemic-shortened 2020 campaign, took second at Sno*Drift, followed by fourth at 100 Acre Wood with mechanical issues and an event-ending crash while fighting for the lead at Olympus. The crew of the #180 Subaru recovered with a third-place finish at Southern Ohio and second at New England. Oregon’s final round proved to be their best performance of the year, with a fast and near-flawless drive on Saturday to overtake Pastrana and Ken Block/Alex Gelsomino for the lead early in the day followed by a well-managed Sunday to lock up the win.

Subaru Motorsports USA will be back in competition for the remaining three rounds of the Nitro Rallycross season, beginning at Wild Horse Pass Motorsports Park in Phoenix, Arizona November 13th-14th and continuing with a visit to Glen Helen Raceway in San Bernadino, California the following weekend before the season wraps up at The FIRM in Florida, December 3-4.

About Subaru of America, Inc.

Subaru of America, Inc. (SOA) is a wholly owned subsidiary of Subaru Corporation of Japan. Headquartered at a zero-landfill office in Camden, N.J., the company markets and distributes Subaru vehicles, parts and accessories through a network of more than 630 retailers across the United States. All Subaru products are manufactured in zero-landfill plants and Subaru of Indiana Automotive, Inc. is the only U.S. automobile manufacturing plant to be designated a backyard wildlife habitat by the National Wildlife Federation. SOA is guided by the Subaru Love Promise, which is the company’s vision to show love and respect to everyone, and to support its communities and customers nationwide. Over the past 20 years, SOA has donated more than $200 million to causes the Subaru family cares about, and its employees have logged more than 63,000 volunteer hours. As a company, Subaru believes it is important to do its part in making a positive impact in the world because it is the right thing to do. For additional information visit media.subaru.com. Follow us on Facebook, Twitter, and Instagram.