PANAMA CITY, Panama, Nov. 2, 2021 /PRNewswire/ — Panama rolled back restrictions on attending houses of worship. And parishioners of the country’s many faith communities looked forward to the services and the fellowship of their churches, mosques and temples. But they did so with trepidation. Was it safe to gather with their congregations? Volunteer Ministers from the Church of Scientology Mission of Panama, trained in the most advanced sanitization and disinfection protocols, helped ensure the safety of scores of religious institutions. 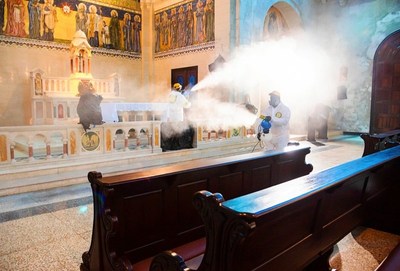 Volunteer Ministers from the Church of Scientology Mission of Panama, disinfected scores of religious institutions.

A team of Scientologists was trained on the same protocols used by the Volunteer Ministers of the Freewinds, the Church of Scientology seafaring religious retreat and humanitarian ship. The Freewinds was docked in Aruba when the pandemic was announced and borders closed. Their work to protect the island nation is featured on an interactive timeline on the Scientology website.

In May, the Volunteer Ministers of Panama completed training on the use of these protocols and began their outreach.

One of their first projects was the sanitization of a Catholic school, fogging 100 rooms consisting of some 5,500 square meters. Next was a Catholic orphanage caring for 17 children from infants to 10-year-olds, soon followed by two homes for the elderly, a home for indigenous girls and a boarding school for 28 underserved children. They continued with other similar facilities and also trained members of the local Red Cross chapter in these protocols.

Next, the Volunteer Ministers sanitized dozens of Catholic and Evangelical Churches, a Catholic cathedral, and the Baha’i temple of Panama City.

The Ministry of Public Security decided to hold Las Estrellas de Colón, an annual football competition: 132 teams of more than 1,500 underserved children aged 9 to 13 compete for the championship. The Volunteer Ministers sanitized the stadium and the buses transporting the children. And each young athlete received a How to Keep Yourself & Others Well booklet as they entered the stadium.

In fact, everywhere the Volunteer Ministers went, they shared the materials available through the online Church of Scientology How to Stay Well Prevention Resource Center: dozens of booklets and public service announcements, charts and signs, explaining the basics of prevention in simple terms in 17 languages including Spanish—all available free of charge from the Scientology website.

The Church of Scientology Mission of Panama opened in 2019 and was granted religious recognition in the country. The work of the Freewinds religious retreat is featured in the interactive timeline on and an episode of Inside Scientology on the Scientology Network.

The Founder of the Scientology religion is L. Ron Hubbard. Mr. David Miscavige is the religion’s ecclesiastical leader.