– Compared to pre-pandemic numbers, the U.K. has recovered 68% of its outbound international travel, with numbers rapidly increasing and currently the highest they have been since the pandemic began

LANGLEY, United Kingdom, Nov. 8, 2021 /PRNewswire/ — After nearly two years, today, the US has reopened its borders to fully vaccinated international travellers arriving via air from the 26 Schengen countries in Europe, Ireland, China, India, South Africa, Iran, Brazil and, of course, the United Kingdom. Research from the World Travel and Tourism Council (WTTC) estimated that the US economy could have lost up to $40 million a day just from the lack of U.K. visitors alone. Travelport, a global technology company that powers travel bookings for hundreds of airlines and thousands of hotels worldwide, today released the below trend data highlighting the U.K.’s excitement to trek back across the pond. 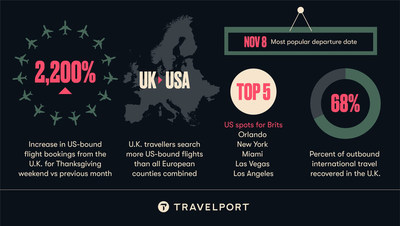 U.K. Leading Europe and the World in US-Bound Travel

The Need to Travel Now

Travelport is a global technology company that powers bookings for hundreds of thousands of travel suppliers worldwide. Buyers and sellers of travel are connected by the company’s next generation marketplace, Travelport+, which simplifies how brands connect, upgrades how travel is sold, and enables modern digital retailing. Headquartered in London, United Kingdom and operating in more than 180 countries around the world, Travelport is focused on driving innovation that simplifies the complex travel ecosystem.

EchoX.app launches «The METASENS Universe» project, rocket to the moon